Yesterday,tuna was been our dish for breakfast and I cooked some pinoy style spaghetti-the sweet taste tomato sauce..for lunch as well as dinner.I don't usually eat a lot in dinner time..so there has been a spaghetti sauce leftover. Since its Sunday,we attended a mass and right afterI become so hungry.It's already a late breakfast so what we have are the leftovers -the tuna and spaghetti sauce. I made the tuna a sandwich and the spaghetti as a sauce for nachos sprinkled with mozarella cheese.It's yummy!=)we had after all a breakfast that is a real quick to prepare. Jerome promised me that he'll gonna cook kare-kare for our lunch.I've been so excited 'coz it's been really a while that i never had the taste of the famous peanut sauce. The ingredients were not really complete, we just utilize what we have in the kitchen.Guess what!it turned out to be like an authentic kare-kare from cabalen! I should have taken a picture of it,unfortunately I forgot and too late to take the time the thought of it cross in my mind.=(ubos na eh!

We're supposed to go to Flughafen but we're just so lazy to go outside.Jerome is actually teasing me that I am couch potato. I only watch tv and that's almost for the whole day and have my break if its eating time! Today, is another ordinary weekend but filled so much with food trip stories.
Posted by Joe-ann at 7:58 PM 2 comments:
Labels: meals for the day 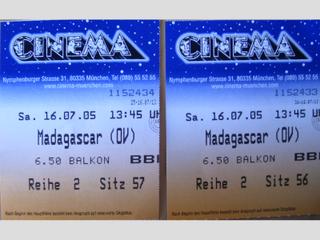 We watched "Madagascar" last week. It's a lot fun. This movie is really great. It can make you laugh 'till the last part of it.It's really refreshing and the animations were perfectly set. It reminds me of the first time I got to watch a movie here.The choices were Balkon and Parkett which was translated in English as balcony and floor respectively. I was wondering if the floor means we have to sit literally on the floor.(just trying to be weird).Fortunately,it was not the way I thought things would have done. Floor simply means like "de luxe" the way it is often categorized in the Philippines. This time we watched early showtime of Madagascar. It's 1:45 in the afternoon. The price was half so Jerome decided to try the balcony. Yup! I thought of it quickly..that would be nice, at least we could get to see how is balcony here looks like.Well then, its of course at the upper floor projecting from the rear over the main floor as the word balcony purports.It's composed of only 2 rows. So small indeed compared to the common balcony that we have in the Philippines. Indeed its a lot better to watch the movie from here because you'll not be block with tall guys sitting in front of you. But of course,the movie is a lot more important for you to enjoy.
Posted by Joe-ann at 9:13 PM No comments:
Labels: confab 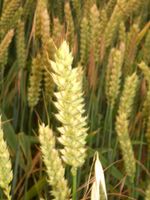 Summer time here is different from the usual sunny days in the Philippines. The sun set here at around 9 to 10 in the evening. It really feels good that you still can do a lot of things even it seems to be late night already. I look forward to having this things enjoyed the whole season. But now..things are not happening the way i expect it to be. These days feels like spring time again. The temperature are colder and oftentimes it rains so badly. I could just be happier if we'll have the whole sunshine in a week. Unsure I may be..wether it will rain or not..this season is the best. Sunshine reflects a smile in every face, just like in any poetry that i've read.

I enjoy to see the wheat turning gold..it comes to my senses that harvest season is coming. This is the first time i've got to see these things for real, and its awesome.The picture that i have here is taken when were on our way to "lidl" to buy some food stuff.It's indeed a season to be merry. The warm feeling inside to see little girls and boys playing and enjoying the summertime. Such a great delight to my eyes.

We now can play badminton outside.30 minutes is enough to really have fun while shuttlecocks flying so high.Jerome and I were not really good at this things..but we get to enjoy playing it. It's really fun and at the same time it makes you physically fit. I hate having aerobics activities so this may be a better alternative. And the only way we can do it without cost is during summer time. My great thanks to summer season!

Posted by Joe-ann at 12:43 PM No comments:
Labels: confab

War of the Worlds

On June 29th, 2005, Earth goes to war. From Paramount Pictures and DreamWorks Pictures comes "War of the Worlds," directed by Steven Spielberg and starring international superstar Tom Cruise. A contemporary retelling of H.G. Wells's seminal classic, the sci-fi adventure thriller reveals the extraordinary battle for the future of humankind through the eyes of one American family fighting to survive it. The film also stars Dakota Fanning, Miranda Otto, Justin Chatwin, and Tim Robbins.
Cruise stars as Ray Ferrier, a divorced dockworker and less-than-perfect father. Soon after his ex-wife (Miranda Otto) and her new husband drop off his teenage son Robbie (Justin Chatwin) and young daughter Rachel (Dakota Fanning) for a rare weekend visit, a strange and powerful lightning storm touches down.
Moments later, at an intersection near his house, Ray witnesses an extraordinary event that will change all their lives forever. A towering three-legged war machine emerges from deep beneath the earth and, before anyone can react, incinerates everything in sight. An ordinary day has suddenly become the most extraordinary event of their lifetimes - the first strike in a catastrophic alien attack on Earth.
Ray scrambles to get his children away from this merciless new enemy, embarking on a journey that will take them across the ravaged countryside, where they become caught in the desperate tide of refugees fleeing from an extraterrestrial army of Tripods.
But no matter where they run, there is no safety, no refuge … only Ray's unconquerable will to protect the ones he loves. (Synopsis)

We watched "War of the Worlds"last week,and indeed we had a great time with this movie. It is more than just an alien invasion.Alien invasion might not be a new idea but how it is portrayed makes it more interesting. The doomsday of Human kind is such a fearsome and appalling idea, and this is what I think the core of it.How people panicked when face in such situation. The emergent bahaviour of human when face in such circumstances. The portrayal of survival is just so towering..that even if it means casting someone's life.The other most important point that i've got from this movie is a reminder of how important is the purpose and intention on anything we do.Just like in the movie..the aliens only purpose is the destruction of Human Kind..and therefore it never succeeded. Personally i like the movie..it might not be a movie that i've got to watch many times but...i should say it is worth my time watching it!

Posted by Joe-ann at 2:40 PM No comments:
Labels: reviews

I was a bit amazed to see how different St.Ulrich Parish from St.Korbinian Parish.The latter was the parish where we used to attend mass during Sundays.There I find people nice and really formal.I used to say that parishioner there seems to be so traditional and really just so amazingly solemn. Children who cried during the mass are hastily brought outside by their parents for them to maintain the solemnity of the mass and perhaps not disturb other people from the baby's cry. Parishioner are organizely lined up for communion during Eucharistic Celebration.This is one of the things that really amazes me and made me think..Could this be possible in the Philippines?..,where the first row has to stand up first and take the communion and then..other rows follow orderly.At first I feel that people there are little bit cold but then..as time goes by..I learn to like the atmosphere and feel comfortable with the people around.The feeling of comfort and belongingness was not instant but I learn to like it after all.

Jerome actually had an idea that there is a Parish that is a little bit nearer to our flat..and that is St.Ulrich.He once went there to attend mass but unfortunately seems like there has been no service at that the time.Since then..we never tried going our way to St.Ulrich since we didn't know the schedule of the masses.Last Monday a pamphlet from St.Ulrich was distributed announcing its preparation for the world youth day and have its schedule for the masses included in it. As we we're browsing it..we decided to attend the Sunday mass there.This is our first time to attend a mass in St. Ulrich Parish..and coincedentally it is their Feastday.The attendance was really overwhelming and the songs sang are lively and modern. I find the fellowship warmer and a little bit relax. What's most interesting to witness is the kids playing the flute as part of the choir.The priest really interacts during the sign of peace by roaming around the church and greeted everybody.It's kind a different from the usual setting that i witness during my Sunday mass.Communion here ist not as organized as the St.Korbinian parish did.Parishioner just stand their line as they want,just like the usual way i witness in the Philippines.

Both Parish are really worth to be given credit for their effort, in really giving service and spreading the goodnews of God.They may be set in a very different manner but one thing is for sure..both of them let me feel the presence of God and its Holiness with it.People from its respective parish may be so different in their way of celebration,but they all show God in thier own way.I am really thankful for this day that we have found St.Ulrich..seeing a lot of people coming to the house of God just add up energy and enthusiasm within our soul and made us realize that the living God dwells in our hearts.