This place is one of the most popular tourist destination in Ireland. Millions may have visited the place every year but you won't be deprived of the extravagance of its landscape. The view is simply breathtaking. The sun shone brightly and it was indeed a lovely day. We were able to enjoy the sight blended with the enchanting irish music of Tina O' brien. An absolute must see, I should say.
There's a charge of 8 euro per car for admission and that covers all the people in the car and charge for facilities. It's comparatively inexpensive. If you want to experience the cliffs virtually they have the so called Atlantic edge Exhibition and you will be charge for extra 4.50 euros for that. My hubby and my sister's hubby opted not to try it, they prefer just to be with us and the kids enjoying the place. What made it more interesting, is to see shops built inside the hill. It's amazing! All I can say is we certainly have a satisfying visitor experience. Photos may not be enough to justify the beauty of nature but I hope you'll enjoy what I have here: 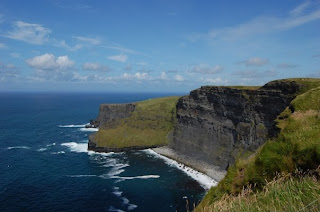 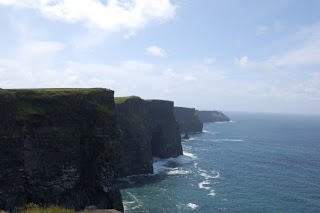 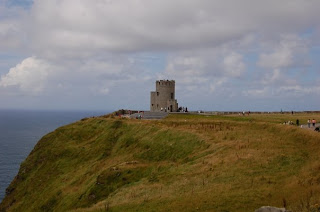 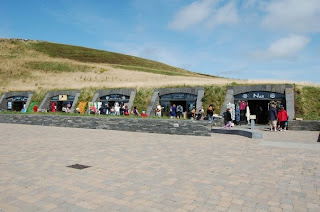 cliffs of Moher shops
Posted by Joe-ann at 4:35 PM 2 comments:
Labels: all about family, travels

The rain does not stop us to enjoy Conemara. I just thought it would be lovelier maybe if it's sunny. The overcast and rainshowers gave us a different look but certainly the place is amazing. It's around 1 hour drive from the city center. Mists and dampness are definitely the elements that you're not looking for summer, and irish summer is, can be a little bit disappointing. However,that same natural elements made the countryside so green. If you're a lover of this stunning coastal sceneries, you'll definitely love the place. We stopped for a while to take a glimpse and have some photos of the place. 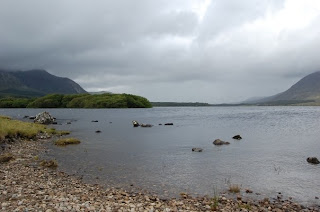 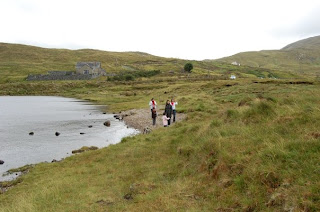 Conemara
One of its attraction is the Kylemore Abbey. It is a Benedictine Monastery. The abbey was founded in 1920 by Benedictine nuns who fled Belgium in World war I. Originally it's Kylemore castle. Just like any castle it has a history of its own. What made me captivated is not its story but the place itself. I should say the photos speak for itself as well. 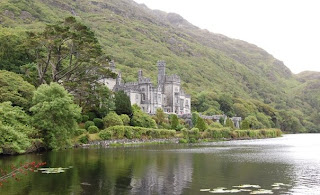 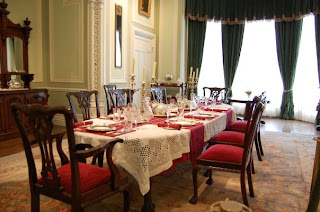 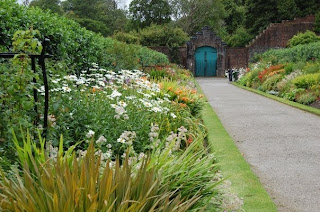 kylemore garden
Posted by Joe-ann at 3:57 PM No comments:
Labels: all about family, travels

We've been to Ireland three times already but never have the opportunity to explore it. This time we got the chance to visit Galway. We spent 3 days in this lovely place.It is around 3 and a half drive from Co.Meath (near Dublin City). As we arrived, the first stop we've got was the Atlantaquaria. It's an indoor aquarium, the place is not overwhelmingly fantastic but just enough to make the little ones enjoy it. What made it commendable is not the place itself but the guided tour for children. They were able to touch the star fishes and crabs in a way that these animals will not be hurt and of course safe enough for the children. They also participated in feeding the fishes which certainly was a fantastic experience for the kids. Here are some photos we had. 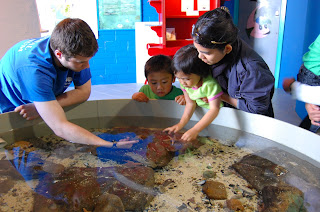 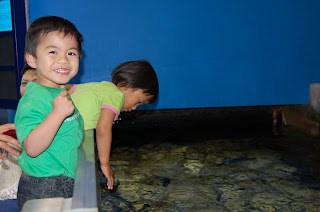 having fun with the fishes 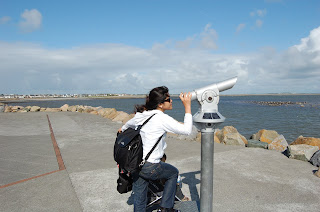 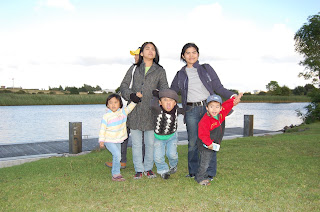 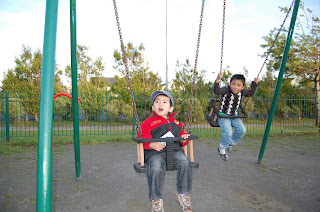 corrib village playground
We stayed in one of the university apartments in Corrib Village, a home to students of National University of Ireland in Galway. It's a budget accomodation situated in the heart of the city. The only thing that I find not so impressive is the room cleanliness. It's not dirty though but not impeccably clean,which for me, the most important. Its atmosphere compensates the whole thing. The environment is so relaxing and child-friendly. We ended the day strolling the place and enjoying the playground. The kids absolutely had fun, and for parents, seeing the kids having fun is certainly a whale of time.
Posted by Joe-ann at 10:14 AM 2 comments:
Labels: all about family, travels

The long week visit to my sister in Ireland

It has always been a dream of mine to be near with my family, but situation does not allow us to have it. And God is so good that He let me and my sister live in neighboring countries,such as Ireland and Germany, therefore seeing each other more often is something that is capable of happening. Ireland's weather is cool and damp. This is the summer where you can never hear me complaining of the heat, because heat doesn't beat too much. We always have our light jacket with us the whole time. It's not just me whose having a great time more so my little one. It's so rewarding to see him enjoying the company of his cousins. For the whole time that we were there, it's not just them who learned a lot, but just by looking at how children behave,we (I and my sister) also learned a lot from them. We would rather say they are certified "little people". It's really a lot of work but it's also lots of fun.
Our typical day there of course started with a "chaotic breakfast" where each of them(the kids of course) wanted something different, and always wanting to try what the other one is eating. Sounds peaceful right? If the weather looks lovely then playground is the next thing to go. If it's raining which is so often, then its either we stay home and play, go to indoor playground or just go to the mall. These may sound so ordinary and routine but it's definitely an occasion where you wanted not to end. Somehow making me wish that we could just be neighbors literally.
I would love to share some photos we had. 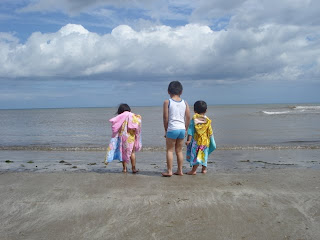 one lovely day in the nearby beach 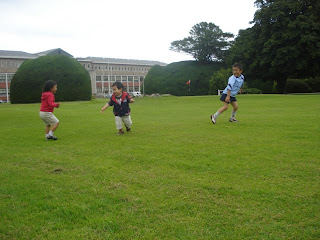 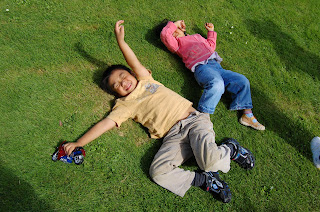 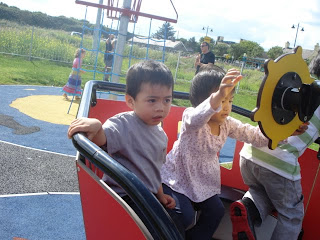 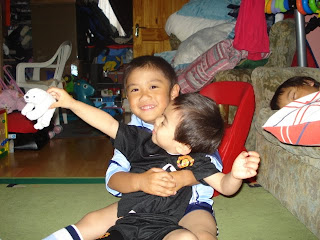 at my sister's place, after the little party for the 3 of them 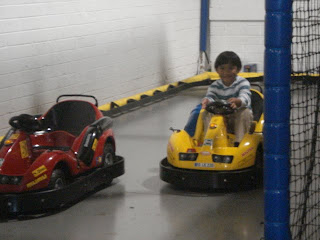 at PJ'S an indoor playground 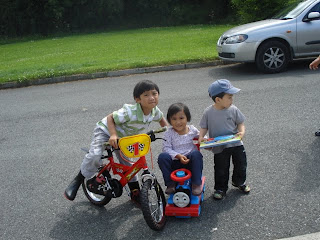 taken in front garden
We also went to National Aquatic Center, its located in Snugborough Road in Dublin, we had a superb time swimming. The kids were really enjoying, not just the kids but the the adults too. What was really memorable for all of us was when the alarm sounds, it means waves is activated. My little boy was so brave in facing the waves. I can't believe seeing him with no fear. What's unfortunate is that no camera's allowed, therefore I've nothing to show you here. We're not able to take some photos outside too because it rained just as we arrived and the rain was pouring when we're about to leave. No chance really.:(
It was a actually a 7 week long stay, we never did something extraordinary. What matters most to me are the moments that we're able to spend together.
Posted by Joe-ann at 4:06 PM No comments:
Labels: all about family, travels
Newer Posts Older Posts Home
Subscribe to: Posts (Atom)