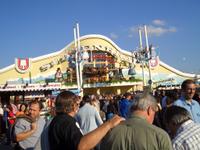 It's an occasion for merry making and beer drinking. Sounds really exciting and fun! I don't drink beer because i hate its bitter taste, though it seems to be the core of this celebration, I still feel the excitement to really witness what's with the celebration. So we went to Theresienweise or die Weisn(which means the meadow,Bavarian dialect) for short. We just roam around the place and get to taste some of the food they had. The place is surrounded with lots of brewery from Germany.I've got some pics here. There wer 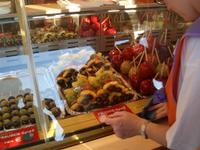 e also plenty of cute and amazing souveniers. We never get to have one,anyway, the celebration is yearly...so not really a must to have it 'coz you'll get to see these things around the next time. The glaciered fruit were so just so sweet not to be noticed. They look so inviting so we tried it. It taste good, well definitely a fruity taste blended with the sweet confectio 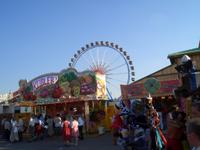 n. I took some pics of it. Surely so yummy to see and in very festive mood.Aside from the sweet things they had, we also tried the half meter bratwurst. There's nothing really so special about it aside from its size. It taste like the ordinary bratwurst that you'll find around the city, but it looks so cute..and special. I love to see people enjoying the rides but i never get to enjoy it myself. I get easily drizzled with dizziness in a roller coaster rides. The rides here are so fun to look at and it really made you crazy. The people up there riding seems to be in a turbulent spaceship. I'm sure i can't really make it myself so we never tried any of them, but of course... i've got pics there for you to see. 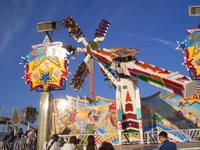 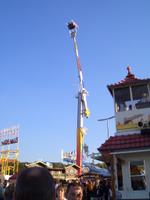 I'm not feeling well a bit because of some allergy attacks...so we had to leave the place early. For the short time walking around and seeing lots of people celebrating and merry making makes your heart in a real glow. So good to see. It reminds me that there is really time for everything..no matter how much the world seems to be chaotic, no matter how you feel bad about things..these gave me courage and inspiration that everything will pass and a time for merrymaking is surely to come.
Posted by Joe-ann at 10:54 AM No comments:
Labels: confab 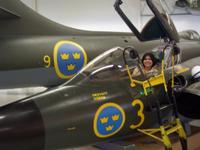 on. It's about 2 hours and 15 minutes ride to Linkoeping.It is the fifth largest city in Sweden. As we arrive from the station, we were fetched by ate lenlen with his hubby and little cute son. We were fortunate to have friends like them who welcomed us with great hospitality. We right away went to their home and had our lunch with them. We were enjoying the tacos and wraps. 'Te lenlen is such a good cook. It is quite apparent that the Swedish art and style are more elaborate compared to Germans. I like the way houses were set. What amaze me is that most of their houses there are really made of wood. I thought of it as peculiar for a cold country..but it really is. As were done with our tacos and wraps we headed to Flygvapen mu 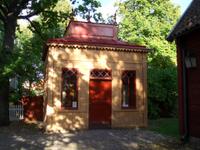 seum to gaze the archaic fighter jets. It's a lot of fun and pretty amazing. You could even have a chance to ride with these jets,just look at my pics in here.We then had a short glimpse of their old town. The picture I have here is a toilet.I really thought of it as something like a prayer room not until i read the label toalett. The buildings here long existed in certain areas in linkoeping and was move here to be all in one place. These may look so old but what's interesting is all of these until now are still operational. I'm very much astonished at the same time very much enjoyed. We also had a small walk to the city center of Linkoeping. It's a clean and bea 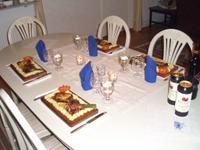 utiful city. It's been a long day so we then have our way home. We were so touched by the preparation they had for us. Ate lenlen's hubby was doing all the cooking for dinner. It's a typical swedish food, and it was so delectable. I have here the pics just right before we had dinner. So toothsome right? We then had our confabulation which lasted until 11 p.m. 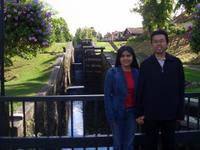 It is indeed a very short time for such a beautiful occasion. We need to make haste because our return flight to munich is at four in the afternoon. We then only catch a glimpse on their wondrous park there before catching the train going back to stockholm. It is without doubt a wonderful weekend. Memories like these are my greatest souvenier.
Posted by Joe-ann at 10:26 AM No comments:
Labels: travels 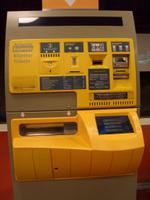 It's a two-hour and 10 minutes flight from Munich to Stockholm. I was so excited when the plane was on the ground, finally I'll be able to see one of the oldest city in europe. Just right at the arrival before the customs area, you can see the money exchange station. So I hastily went there and have my 50 euro be exchange with SEK currency (Sweden Kronor), I thought,I really gonna need it at the arlanda train station for the tickets going to stockholm city center. The picture I have here is the train tickets machine.Credit cards could also be used in purchasing tickets. One thing i've noticed is that credit card is almost acceptable anywhere and everywhere. Jerome picked me up at the arlanda Stockholm city center station and it is there that our small walk tour began. Our hotel was just along Drottninggatan..so we started from there. The place was really nice. There's a lot of coffee shops and amazingly lots of asian restaurants..from japanese,chinese,thai,malaysian, and even mongolians resto. But of course we never tried any of them. 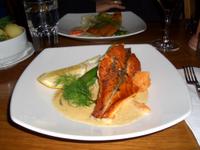 We choose to have scandinavian foods. Foods here are really great,here are some pics of what we had for our dinner. Goods here are a little bit expensive compared to Germany. Along our walk from Drottninggatan heading to the old town of stockholm..there you can find a lot of beautiful sight. Old buildings along the coast and bridges that let you have a view of the other side of city was so admirable. Buildings here had already existed as early as 19th century,but they were still intact and sturdy. How Stockholm may look like in early centuries are of course much different from now, but buildings there that stood still and strong is somewhat the legacy of thier forefathers to them. 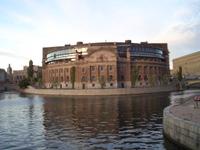 It looks like a city of history combined with hi technology. It looks like a bigger version of Venice. A feeling of nostalgia struck me a little. Sometimes seeing a lot of things that could have made you think that's its from the past..feels like a bittersweet longing for home. 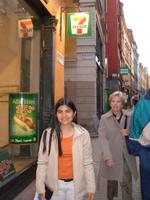 It's my first time to see 7-11 convenience store..I am very much surprised so i posed and got some pics with it. The weather is pretty good that day but a little colder than Munich. The people were nice and all of the stores we've entered had an english speaking service. Real good for tourist. We really had a great time in Stockholm.It's just a short walk blended with our small talk that made it more interesting.
Posted by Joe-ann at 12:25 PM No comments:
Labels: travels
Newer Posts Older Posts Home
Subscribe to: Posts (Atom)