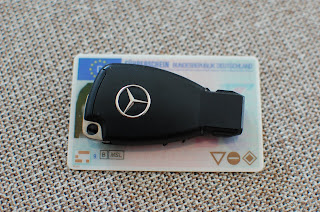 Yey! Finally, I have my driving license today. My heart is leaping with joy and so much gladness. I praise God and thank Him for it. My (driving) practical exam lasted for about 35 minutes. I was a little nervous as I get hold of the key and adjusting the mirrors. The examiner and the driving instructor got inside the car. The examiner then gave me instruction on how the examination goes. Before he instructed me to start driving he asked a question (of course in german) if I know where the hazard light located and if I know how to turn it on. Of course I knew it, but the problem was, I didn't understand his question. He sounded like saying "veh-nen", I said to myself, what word is that? What does it mean? I thanked God that the examiner was a bit patient with me, and complimented it with action, then I realized that he was saying "warnen" which means warning. Btw, in German "w" is pronounced as "v". As I got it, I just showed the hazard light switch and that actually break the ice. They were laughing at me, knowing that it's not that I don't know about it but I don't understand the question itself. I did a good start, it was when we were in the Motorway that I screwed up (just a little bit). You can really see that the driving instructor and the examiner were in full attention on how would I enter the motorway. I think, I did it right, I heard the examiner saying "Jawohl" which means "yes, indeed!" It was when he asked me to exit in the direction to Stuttgart that I did the mistake. I exited correctly, but as I reached the exit, there were two lanes, and it was so bad of me not see that the right lane is leading to an emergency bay. I was so focused on the idea that I should use the right lane, and I was wrong. But it's not too late anyway, I noticed that it will lead me to dead end, perhaps with all the angels backing up I was so calm, and was able to think right, I managed to change to the left lane which leads me to the right direction. I really thought that was it. It's over. That was a sign of poor observation of course, but I just continue to do my best. As we exit the motor way, we went to some federal roads, and residential areas, did parallel parking and headed back to the driving school. As I glanced at the back, the examiner was smiling at me, ask me to sign something and handed me my license, what a relief, whew! It was a wonderful day. In my head I was shouting yehey! I did it.
I would like to talk about driving in Germany and that includes getting a license, but I would need a separate post for that so I can put more details about it.
Posted by Joe-ann at 4:05 PM 11 comments:
Labels: All about Germany, confab 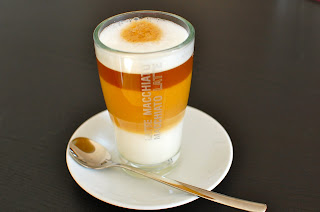 my caramel latte macchiato at home
Sky is gray, chilly and everything looks gloomy. A warm drink can fill it anyway.I like to drink coffee occasionally but my hubby totally does not, so it's not practical for us to buy a coffee machine if its only for me and of course for some guest. I want something that all of us can enjoy and use it. So we started checking out the small coffee/drink machines. We compare functionality and prices, until we came up with a winner. We finally have our coffee machine, no wait, not just coffee but tea machine as well. We both enjoy it,having coffee occasionally and enjoying tea time together. I like my coffee mild and with lots of milk, it doesn't sound coffee anymore right? but it is... latte macchiato just suits well to my taste. I don't need to go to coffeeshops anymore to enjoy it. I could now do it at home.
Posted by Joe-ann at 10:05 AM 10 comments:
Labels: all about family, confab 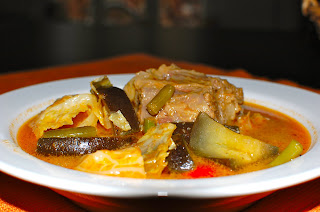 It's part of my typical day to cook lunch for the family. I just usually cook whatever it is that's available. Last night, when I checked the fridge I saw the ox tail and nearly on its expiry date, so that made me think to just put in a slow cooker so it would be hassle free cooking for tomorrow. I let it sit there for 9 hours. So now, I have a very nice broth and tender ox tail ready for my kare kare.
Here's the recipe:
500 g ox tail
100 ml peanut butter
1/2 big eggplant
1 cup green beans
1 cup cabbage
1/2 big pepper
1 tsp. red pepper powder
1/2 pc. onions
1/2 clove garlic
1 tsp oil
1 tbsp sauteed shrimp paste (bagoong)
salt
pepper
Saute garlic and onion in a oil, then put the cooked ox tail and cook for few minutes. Then pour the broth (leave a 1/2 cup of broth for diluting the peanut butter)and add the red pepper powder. Let it boil for few minutes and put all the vegetables, while the veggies are half cooked, pour the diluted peanut butter. Put the sauteed shrimp paste or bagoong and mix until the veggies are done. Sprinkle salt and pepper to taste. That's it!
It would have been nice if I have the tripe, and some of beef slices,but the ox tail that we have is just perfect.Traditionally it should have atsuete but I don't have it so I used the red pepper powder and believe me, it turned out really great.You can use cornstarch to thicken the sauce,but I prefer the sauce thinner. I'll be setting the table now and hubby will be home in a little while.
Posted by Joe-ann at 5:20 PM 14 comments:
Labels: all about family, meals for the day

Laterne is the german word for lantern. It's customary in almost all kindergarten in Germany to have this kind of celebration every November. They call it St. Martin's day where kids are encourage to make their lanterns and as darkness comes, the parents and children with their paper lantern will go out side and have its procession.
In Johann's kindergarten we started with the children singing and their teacher playing the musical instrument. Then, they had a short story telling about St. Martin. Followed by a simple presentation with candles. It's fun to see the kids singing and doing some interpretative dance and actions. After that, we then started the procession. My little boy did a good job with his lantern, he's holding it with great care. By the way, the light in this paper lantern is a tea candle. The procession took about 15 minutes or more. And as we all came back, we ended it with a small bonfire while enjoying the cookies, sweets and hot children punch. It was a fun filled activity for all of us. Here are some pictures we had. 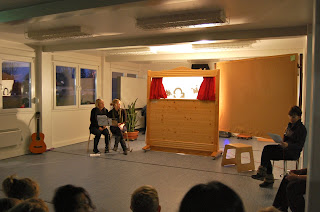 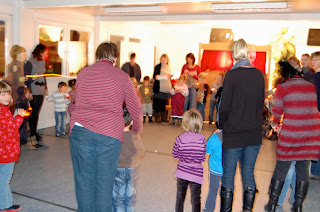 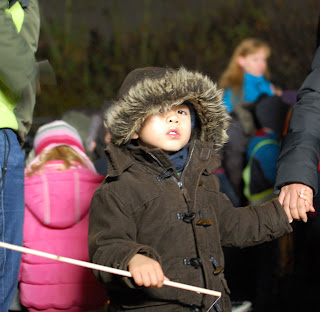 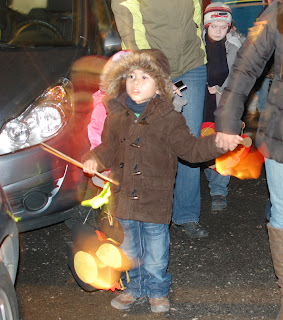 showing off the paper lantern 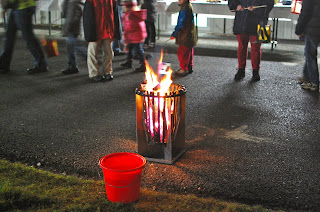 small bonfire
Posted by Joe-ann at 3:54 PM 6 comments:
Labels: all about family, All about Germany

"And there was light that’s why I’m bright"

lighting in our dining area now
It’s been almost 2 years since we moved to our place now. I recall how we set things up little by little until everything seems complete. Even how sophisticated and glamorous the furniture you put, I don’t know if you agree with me, it is always the lighting that will complete the whole look of the house and of course it’s you who will make it a home. I am minimalist in almost all aspect so we actually bought the very basic ones and now not even a year one lighting bites the dust and then the next one and so on. I was quite disappointed really, somehow reliable source and good quality matters after all. So now I’m looking for a lighting retailer that specializes in indoor and outdoor lighting product. I am thinking of a contemporary modern pendant lighting for the dining area. I should say in our home, dining area is the part where lighting is always in use. Now, I’m giving you an idea of how much time we spent on dining. Pendant style is very functional in times where you need just a little light on specific area. Even before we settle for the lighting that we have right now(the one in the picture above), I was hoping to have the pendant style but just could not find the right one. Contemporary vanity lights would also be perfect for the bathroom. We have a small bathroom and there’s not much that you can do, and lighting would glam it up. I’m more into modern look, so contemporary light fixtures are the ones that I need and that suits my taste well. Winter is fast approaching, the days are becoming shorter so light will make things bright. It may be outdoor or indoor we all need light, more so in this time of the year. I’m very much excited with the new lighting to give a new look and shall I say a house revamp. With the new lighting winter can never be so cold after all.
Posted by Joe-ann at 9:49 AM 1 comment:
Labels: all about family, confab

My son's smile and laughter is an instant vacation. That is something he carry with him all through out the time that we were in Disneyland park. It was a fantastic time for all of us. Now that he's 5, gosh! how time flies, he enjoyed more this time. His fascination for Toy Story made this visit more interesting. Just by looking the way how my little boy was in so much awe of the characters he met, gave me so much joy. It is indeed true that joy comes from seeing others happy. Nothing much change in Disneyland since the last time we visited the place. He still enjoyed the “It’s a small world” boat ride. Here are some pictures for you to see.

The real winner this time was “Buzz Light Year” ride. The smile on Johann’s face was unending. He’s like floating in the sky. You should see these pictures then. 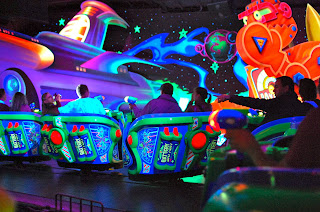 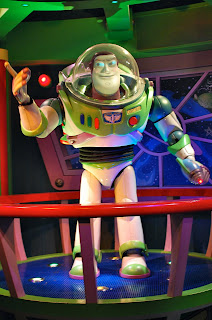 Of course before going home having a souvenir is such a great delight. He got the miniature set of the Toy story. 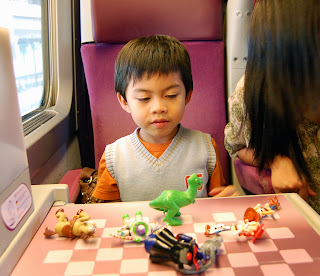 These toys are the memento of this visit but they can get broken, only memories can last forever, and therefore always been the greatest souvenir.
Posted by Joe-ann at 6:44 PM 1 comment:
Labels: all about family, travels
Newer Posts Older Posts Home
Subscribe to: Posts (Atom)