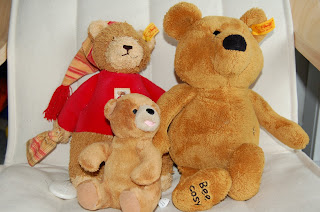 Large number of children are highly fascinated with teddy bears or the soft toy bear,though my son began his appreciation for this cute little things only now that he know certain animals. Even me myself, I get captivated with these soft and lovely toys in the market. It's really an art. Fringe news caught my attention regarding a woman who jumped into a bear's enclosure at Berlin Zoo last April 10,and of course was attacked by the bear, who looks so lovely and cuddly,yet a supreme predator. This is not the first case that I read about someone who jumped at the bear's enclosure. Last year,24th of December, a man was reported to have jumped at the bear's enclosure to ease the bear's loneliness. The man believed that the famous bear "knut" was alone and cold, and he wanted to keep company. He's just so lucky that nothing happened to him. The Zoo keepers where quick enough to divert the bear's attention just before the police arrived and pulled him out of the pen. It made me wonder though if the hype of the stuff toys market made these people to extinguish the frontier of common sense. These creature may look so cuddly and warm loving as a soft toy but are supremely dangerous and a predator in its real nature. I'm a fan of these toys, in fact I used to collect stuff toys when I was young. I'll always be loving this lovely warm and sweet looking stuff toys. I just can't help but write about this just to keep us reminded that these animals are more likely will maul you,than give you a cuddly embrace.
Posted by Joe-ann at 8:50 AM
Labels: confab

So true and great advice. Thanks for visiting our blog.

Ohh. But I love teddy bears.. just dunno with the real ones.

That 24th of December..haven't heard of it.I can't seem to think them mauling.
=)

I'm totally in love with Teddy Bears too. Though I don't think I'd jump into a bear's den at the zoo. LOL! The real bears terrify me. What were those people thinking? Thanks for stopping by.

I collect pigs stuff toys... hehehe... and they are now part of my daughter's stuff toys.

that is true....my daughter loves bears and other stuffed toys....she love her 2 & 1/2 year old puppy and can't live without it...she had it when she was 6 months....thanks for sharing....:) these bears looks huggable!